There were two papers at ICML presenting learning algorithms for a contextual bandit-style setting, where the loss for all labels is not known, but the loss for one label is known. (The first might require a exploration scavenging viewpoint to understand if the experimental assignment was nonrandom.) I strongly approve of these papers and further work in this setting and its variants, because I expect it to become more important than supervised learning. As a quick review, we are thinking about situations where repeatedly:

I’m going to pick on the Banditron paper (second one), which attacks the special case of the contextual bandit setting where exactly one of the rewards is 1 and all other actions result in reward 0, and show that (a) similar performance is achievable via a simple combination of existing modular technologies and (b) superior performance is achievable by optimizing some existing modular technologies for the realizable case. This algorithm is the hardest of the two to compete with, because it explicitly deals with the explore/exploit tradeoff. Note that I’m definitely not trying to minimize the paper—there is analysis in that paper which remains interesting to me and isn’t covered by what follows. I am happy that it was published. The point of this post is showing that a modular approach to building learning algorithms is a strong contender when we encounter new learning problems.

Given the problem statement, my approach to solving the problem would be to compose some modular technologies I know.

Each component above has been analyzed in isolation and is at least a reasonable approach (some are the best possible). Each of these components is also composable. Fitting these pieces together, we get an online learning algorithm (agnostic offset-tree perceptron) that chooses to explore uniformly at random amongst the actions with probability about 1/t1/3. How well does it perform? On the 4 class reuters based dataset used in the Banditron paper, we get the following accumulated average error rates with some code.: 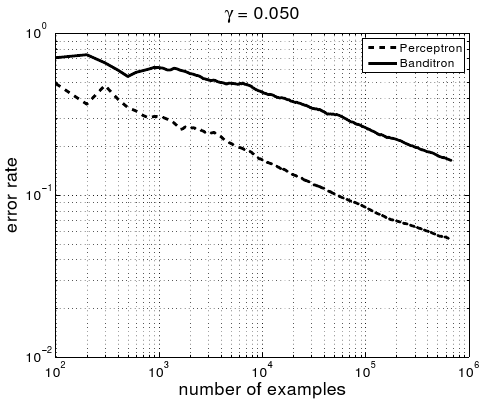 The right plot is from the Banditron paper. The Perceptron line in both plots is for an algorithm which learns knowing the full loss function of each example, so it represents an ideal we don’t expect to achieve here. There are three results in the left plot:

People may be dissatisfied with the component assembly approach to learning algorithm design, because all of the pieces are not analyzed together. For example, the Banditron paper essentially proves that certain conditions are sufficient for the Banditron algorithm to perform well. This is a more complete guarantee than “all the pieces we stuck together are known to work well when analyzed in isolation”, but this style of guarantee has limitations which are both obvious and often overlooked. These guarantees do not show necessity of these conditions, and hence characterize only a subset of settings where the Banditron works. Unless you are lucky enough to know that your application satisfies the sufficient conditions, you’ll basically have to try the Banditron and see if it works for any particular application. Another drawback is that the complexity of analyzing all the different pieces simultaneously means that it’s difficult to use the best elements together. This last point is what leaves me dissatisfied with the complete analysis approach—it produces algorithms which are simple to analyze rather than optimized for performance.

If you are thinking “I have a better algorithm for solving one problem”, then you’ve missed the point of this post. The point of this post is that compositional design is good for solving many learning problems. This post is about one example of that approach in action. We start by assembling a set of components which we know work well from individual component analysis. Then, we try to optimize the performance of the assembly by swapping components or improving individual components to address known properties of the problem or observed deficiencies. In this particular case, we end up with a better performing algorithm and better components (such as stochastic epoch greedy) which are directly reusable in other settings. The essence of this approach is understanding that there is a real vocabulary of interchangeable components and actively using it in designing learning algorithms.

I would like to thank Alina who helped substantially with this post. I would also like to thank Shai for providing data and helping setup a clean comparison and Sham for helpful discussion.